Qian HongYan lost her legs in an accident
Her family in China are poor and couldn't afford prosthetic legs, so she uses a basketball to help her move. - Qian uses two wooden props to drag herself, and never complain, even though she has worn out six basketballs. -
She attends her class- She always smiles
Always cheerful
Be gratefull with what you have 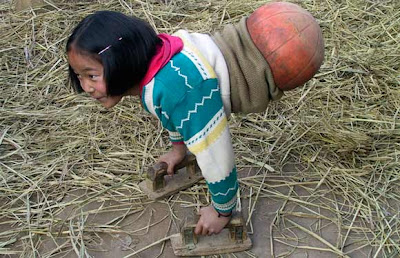 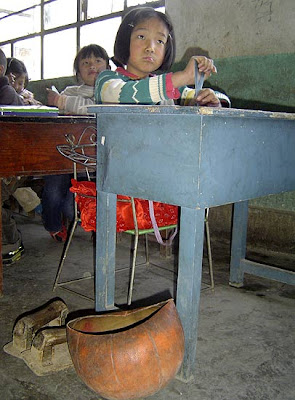 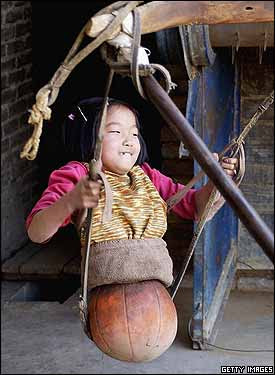 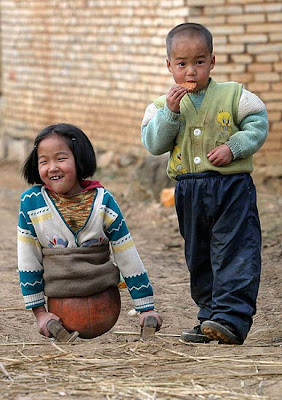 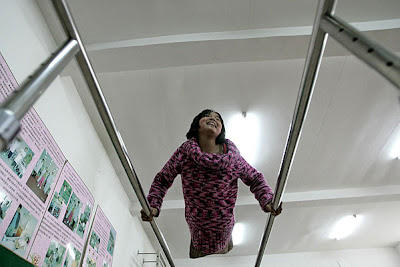 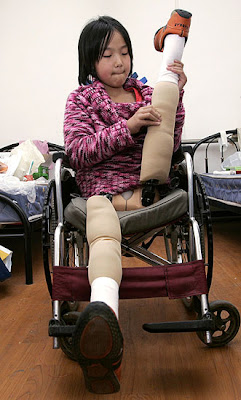 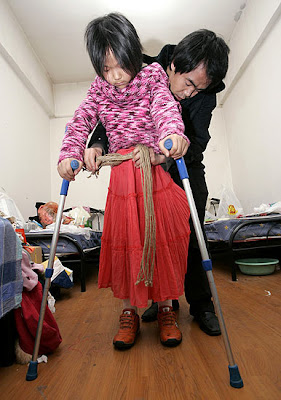 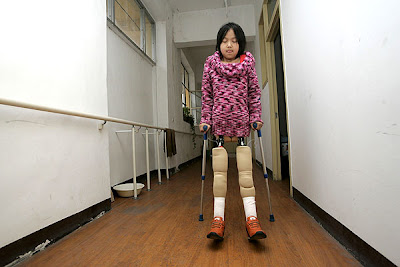 Smile always
Be grateful with what you have.
Posted by Camelia at 10:58 PM No comments:

When Did Girls Start Wearing Pink?

When Did Girls Start Wearing Pink?
Every generation brings a new definition of masculinity and femininity that manifests itself in children’s dress
By Jeanne Maglaty
Smithsonian.com, April 08, 2011

We find the look unsettling today, yet social convention of 1884, when FDR was photographed at age 2 1/2, dictated that boys wore dresses until age 6 or 7, also the time of their first haircut. Franklin’s outfit was considered gender-neutral.

But nowadays people just have to know the sex of a baby or young child at first glance, says Jo B. Paoletti, a historian at the University of Maryland and author of Pink and Blue: Telling the Girls From the Boys in America, to be published later this year. Thus we see, for example, a pink headband encircling the bald head of an infant girl.

Why have young children’s clothing styles changed so dramatically? How did we end up with two “teams”—boys in blue and girls in pink?

“It’s really a story of what happened to neutral clothing,” says Paoletti, who has explored the meaning of children’s clothing for 30 years. For centuries, she says, children wore dainty white dresses up to age 6. “What was once a matter of practicality—you dress your baby in white dresses and diapers; white cotton can be bleached—became a matter of ‘Oh my God, if I dress my baby in the wrong thing, they’ll grow up perverted,’ ” Paoletti says.

The march toward gender-specific clothes was neither linear nor rapid. Pink and blue arrived, along with other pastels, as colors for babies in the mid-19th century, yet the two colors were not promoted as gender signifiers until just before World War I—and even then, it took time for popular culture to sort things out.

For example, a June 1918 article from the trade publication Earnshaw's Infants' Department said, “The generally accepted rule is pink for the boys, and blue for the girls. The reason is that pink, being a more decided and stronger color, is more suitable for the boy, while blue, which is more delicate and dainty, is prettier for the girl.” Other sources said blue was flattering for blonds, pink for brunettes; or blue was for blue-eyed babies, pink for brown-eyed babies, according to Paoletti.

In 1927, Time magazine printed a chart showing sex-appropriate colors for girls and boys according to leading U.S. stores. In Boston, Filene’s told parents to dress boys in pink. So did Best & Co. in New York City, Halle’s in Cleveland and Marshall Field in Chicago.

Today’s color dictate wasn’t established until the 1940s, as a result of Americans’ preferences as interpreted by manufacturers and retailers. “It could have gone the other way,” Paoletti says.

So the baby boomers were raised in gender-specific clothing. Boys dressed like their fathers, girls like their mothers. Girls had to wear dresses to school, though unadorned styles and tomboy play clothes were acceptable.

Read more: http://www.smithsonianmag.com/arts-culture/When-Did-Girls-Start-Wearing-Pink.html#ixzz1e8ZOuL4V
Posted by Camelia at 12:13 AM No comments:

San Quentin, California – In the 1930′s, San Quentin was rife with corruption by management, until a new director, Clinton Truman Duffy, appalled at the inhumane conditions at the prison, decided to implement reforms in the 1940′s. Prior to his appointment, prisoners made counterfeit currency in the prison shops, had their heads shaved and were forced to wear numbered uniforms, while eating out of pails and enduring solitary confinement in poured-concrete cells that had little air and no light. Even a petty offense to prison regulations would land an inmate in solitary, and race riots would put inmate lives at risk on a regular basis. San Quentin is still a harsh environment, filled with California’s most violent offenders, and the high ratio of guards to general population, just barely keeps the prison system from spiraling out of control.

Read more: http://www.toptenz.net/top-10-deadliest-prisons-world.php#ixzz1e8Y6PF9M
Posted by Camelia at 12:10 AM No comments:

Unlike Beyonce's sexy TV commercial which was also banned a while back in the U.K., this banned Dakota Fanning perfume ad is a print ad in a magazine.

The Britain's advertising standards watchdog says that it seems to sexualise a child and could cause serious offence.

According to the Associated Press, four readers complained about the Marc Jacobs Oh Lola! advertisement which shows the 17-year-old actress in a short pale dress with an oversized perfume bottle that looks like a vase holding a giant red flower between her legs. 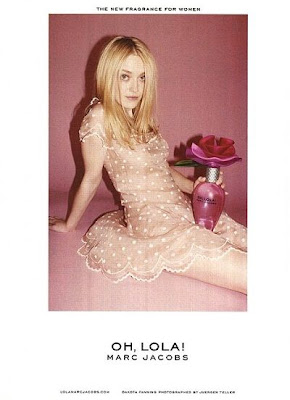 Looking younger than she is


Apparently, it's not so much about the ad being sexy as it is that she looks like she is below 16 and sexy. "We consider the ad could be seen to sexualise a child," it said. Where the bottle is positioned makes the ad sexually provocative.

The perfume maker says they have not received any complaints and the ad is targeted at readers over 25 years old. What's more, the company says that the image is not indecent although it is provocative.

Marc Jacobs chose Dakota because he says she could be a contemporary Lolita.

What do you think? Does she look too child-like for comfort in this ad?
Posted by Camelia at 12:38 AM No comments:

Throughout history, floods have proven to be the deadliest natural disasters. This is mainly due to the high population densities around rivers. When well-behaved, rivers provide the resources needed for agriculture, transportation, and industry. It is no accident that all of the ancient civilizations rose around rivers.

It also should be noted that not all of the dead were the victims of the initial floodwaters. Disease and famine that followed the disasters probably killed more than the floodwaters themselves.

Flooding disasters primarily as a result of typhoons or hurricanes have been excluded from this list and are instead included on the list of worst hurricane disasters.

The Huang He River is prone to flooding because of the broad expanse of plain that lies around it. One of the major reasons for the flooding is the high silt content that gives the river its yellow tint (and thus its name). The silt—which constitutes as much as 60% of its volume—builds up until the river actually is higher than the surrounding land. The tendency to flood is exacerbated by ice dams which block the river in Mongolia; the dams back up the water, and then release devastating walls of water when they break.

The history of flooding has prompted the Communist Chinese government to embark on a program of building dams for flood control. The dams, however, have not proven entirely effective and have been the target of criticism from environmentalists.

The 1938 flood of the Huang He was caused by Nationalist Chinese troops under Chiang Kai-Shek when they broke the levees in an attempt to turn back advancing Japanese troops. The strategy was partly successful. By 1940, the Japanese were essentially in a stalemate with Chinese forces.

Chinese rebels destroy the dikes along the city of Kaifeng, flooding the surrounding countryside.

This flood was caused by the collapse of the Banquia Dam, along with several others, following a heavy rain caused by a typhoon. It is the worst dam related collapse in history.

Although the Huang He has caused more deaths, the Yangtze has had more than 1,000 recorded floods.

A combination of high tides and storms flooded the Thames and the Netherlands, killing 100,000.

A seawall on the Zuider Zee failed, flooding the low-lying polder.

An ice dam clogged the Neva, flooding nearby cities.

The failure of a seawall on the Zuider Zee flooded the Dutch lowlands.

http://www.epicdisasters.com/index.php/site/comments/the_worlds_worst_floods_by_death_toll/
Posted by Camelia at 12:32 AM No comments: