Shanghai’s so-called “leftover women” — the sheng nu (剩女) — are constantly on my mind, now that I have one in my life. She’s my Teacher Wang, and I’ve previously blogged about her lessons on love, dating and being a sheng nu. This harsh term refers to the growing battalion of Chinese women in their late 20s and 30s who are well-educated, well-paid, career-minded, and — gasp! — still single, unlikely to get hitched anytime soon. It’s a hot topic, recently discussed in CNNGo’s ‘The stigma of being single in Shanghai’ and NPR’s ‘In China, Looking For Mr. Right (Enough).’ But no article is as informative or amusing as a first person perspective from a genuine sheng nu, an incredibly charismatic one who has her class scratching their heads, both bewildered and indignant that our beloved teacher can’t find the love of her life.

In our last class, Teacher Wang drew a Venn/set diagram in a lighthearted attempt to explain why she is still single. She kept it simple so we could understand her Mandarin. Below is her diagram, followed by my English translation: 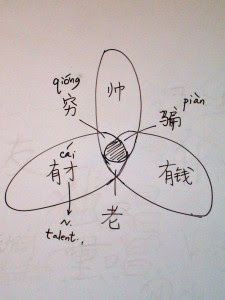 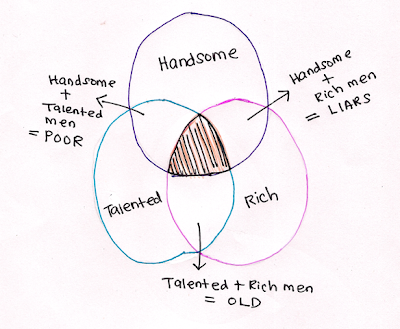 “This diagram represents the men with desirable traits in Shanghai,” she said. “The handsome, the rich, and those who are talented. Those who are good-looking and have some money are sweet-talkers, probably with women on the side. Those who are handsome and talented are usually poor. Men who have cultivated their talent enough to make money from it are old by the time they do. As for the men who are all three, represented by this” — she pointed to the shaded area in the center — “well, they are all gay.”

We burst into laughter. “How about women in Shanghai,” we ask.

Teacher Wang paused, then started drawing. “I guess this also explains sheng nu,” she said, and we stared at her latest work of art:

And women who are all three?

Make Up Your Mind

A man was riding the bus, minding his own business, when the gorgeous
woman next to him started to breast feed her baby.

Five minutes later, the baby was still not feeding, so she said, "Come
on, honey. Take it or I'll give it to this nice man here."

A few minutes later the anxious man blurted out, "Come on, kid. Make
up your mind! I was supposed to get off four stops ago!"
Posted by Camelia at 12:16 AM No comments: 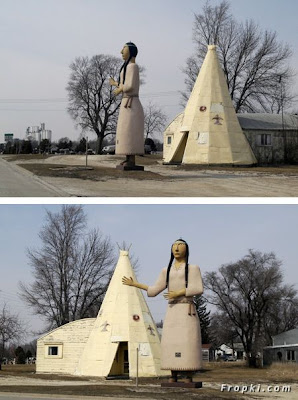 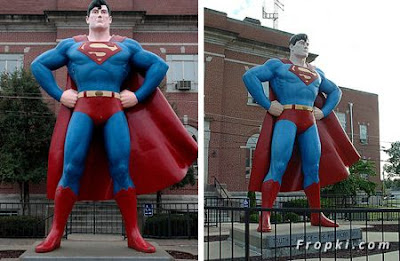 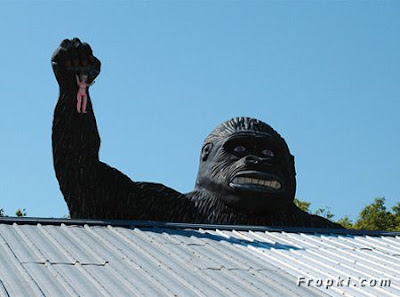 Coolest Roadside Statues
Posted by Camelia at 11:46 PM No comments:

BERLIN: It can talk, see, drive and no longer needs a human being to control it by remote. The car of the future — completely computer-controlled — is on the streets of Berlin.

All summer, researchers from the city’s Free University have been testing the automobile around the German capital.

The vehicle maneuvers through traffic on its own using a sophisticated combination of devices, including a computer, electronics and a precision satellite navigation system in the trunk, a camera in the front, and laser scanners on the roof and around the front and rear bumpers.

“The vehicle can recognize other cars on the road, pedestrians, buildings and trees up to 70 meters (yards) around it and even see if the traffic lights ahead are red or green and react accordingly,” Raul Rojas, the head of the university’s research group for artificial intelligence, told reporters at a presentation Friday.

“In fact, the car’s recognition and reaction to its environment is much faster than a human being’s reaction.”

The scientists have worked on their research car, a Volkswagen Passat worth €400,000 (US$551,800) with lots of built-in special technology, for four years.

Several other groups have also been working on such technology recently, notably Google, which has been testing a robotic Toyota Prius in Nevada.

“There’s a big trend for completely computer-controlled cars — many companies and research centers in several countries are working on it and it is hard to say, who’s got the most-developed vehicle at the moment,” said Ferdinand Dudenhoeffer, a professor for automotive economics at the University of Duisburg-Essen, told The Associated Press on Tuesday.

Dudenhoeffer estimated that with the technology advances, it could only take another decade for the fully automatic cars to start becoming available for consumers. “Even today’s cars are often partially computer-controlled, for example when it comes to parking or emergency brakes.”

However, he said, that besides the technological issues, the legal challenges would be another issue that needed to be regulated: “Who will be responsible when there’s an accident — the owner or the passenger of the computer-controlled car or the company that produced it?”

“However, all in all, one can definitely say that computer-controlled cares will be much safer than human drivers,” Dudenhoeffer said. “Especially if you keep in mind that most of today’s accidents are caused by human error.”

In Berlin, the university researchers received a special permit from the city’s security and safety controllers in June to use it in regular traffic — under the condition that a safety driver sits behind the steering wheel, even if he doesn’t touch anything — not the steering wheel, gas pedals nor brakes.

On a special testing ground, the team has also been allowed to let the car run without anyone on board.

Rojas estimates that once the technology — specifically the sensors — gets less expensive, such cars will eventually conquer the roads.

“It is similar to the beginnings of the computers: 40 years ago, only research labs could afford computers, now everybody is walking around with a computer in his pocket.”

Ideally, the car will respond to orders by remote control, for example on an iPad or an iPhone. With a click or a touch, the passenger can call the car to his personal location and then order the car to drop him off at his desired destination.

“This kind of car is actually perfect for car sharing,” said Rojas. “There will be no more need for owning a car — once the automobile has dropped off its passenger it will drive on to the next passenger.”

-Agencies
http://www.freemalaysiatoday.com/2011/09/21/driverless-car-navigates-berlin-streets/
Posted by Camelia at 1:05 AM No comments: