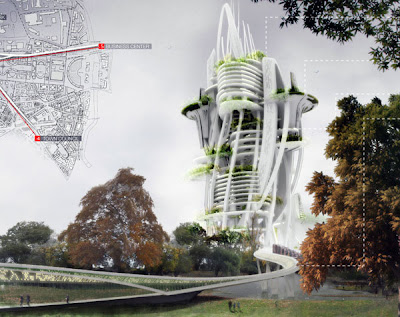 Now for the eVolo Skyscraper Competition finalists. This amazing Tree Skyscraper was designed by Eric Gangaye, Frédéric Velaye Andy, Alvin Pakeeroo, Yann Terrer, and Thomas Liaigre for the French city Montpellier. Apparently inspired by tree which connects the city through its five “roots” and the system of trains and walking paths. The skyscraper is also eco-friendly as most designs and features solar panels, water collectors, and wind turbines. 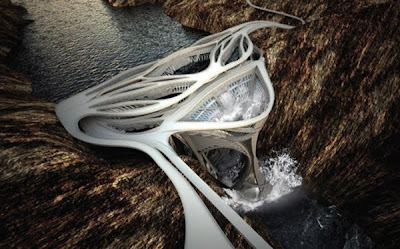 To be honest the third place project by the name Re-imagining the Hoover Dam has impressed me the most. First its shape is absolutely fantastic and of course location adds the charm to it. Designed by Yheu-Shen Chua from United Kingdom this project was meant to re-imagine the known Hoover Dam in the United States. The original dam consists of a platform, a bridge, and a gallery while the project sees all those things merged together and allow the visitors interact with the river via containers. The project also provides a vertical aquarium built-in 700-meter foot tower that hangs into Black Canyon. 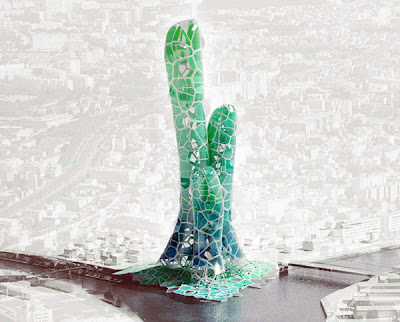 Porifera Skyscraper was designed to be located at the base of Siene River, Paris. The skyscraper’s designers Nicolas Jomain and Boriana Tchonkova were inspired by marine sponges for their project and divided it in three connected towers for various functions like hotel, offices, and housing. The exterior is rather interesting as it has large openings in the structure while using solar, wind, and kinetic energy. This great band of towers can even generate the bio-fuel through algae and sunlight. 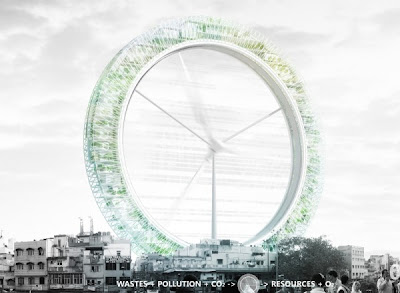 The project that took the first place probably should be even more valued for its purpose. A project for New Delhi called LO2P Delhi Recycling Center is meant for recycling cars the number of which grows by a thousand every day in the city thus polluting the environment. The recycled cars would be used as a building material for new structures. The air would be cleaned with the help of the skyscraper itself, which is designed as a huge lung. 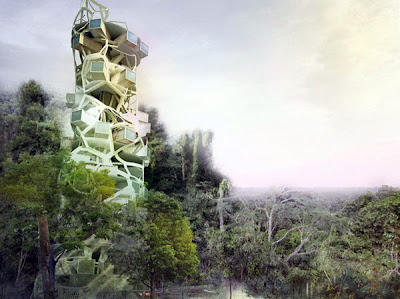 Laminated Wood Skyscraper was designed by Tomas Kozelsky, Patrick Bedarf, and Dimitrie Andrei Stefanescu for an unusual location – the Amazon forest. Its purpose is clear though, research, recreation and education. Laminated Wood Skyscraper is meant to raise awareness about fast deforestation in Brazil. The building looks quiet unusual with its laminated titan-wood blocks connected by intertwining “veins”. 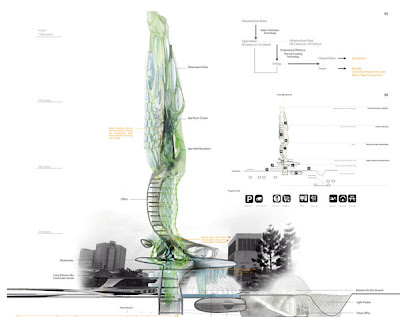 Hydro-thermal Skyscraper by Wendy Teo Boon Ting & Linda Hagberg designed for Taipei is another amazing project. The skyscraper was designed as a replacement for river buffer wall that stands on River Danshui, Taiwan. The skyscraper is to function as a filtering system that would clean the river water and increase the amount of hot water for landscape and habitual use. 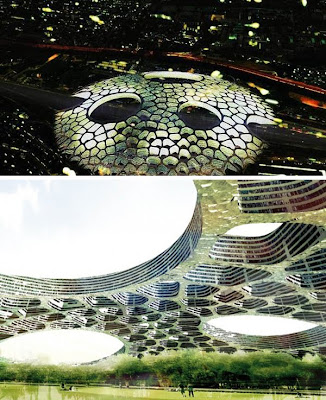 Flat Tower is the project by Yoann Mescam, Paul-Eric Schirr-Bonnans, and Xavier Schirr-Bonnans from France that took the second place in eVolo Skyscraper Competition. In order to preserve the sky-line in a middle-size city but at the same time present the solution for high-density cities French architects went for an unconventional skyscraper that they called “Flat Tower” mainly because of it round flattened form. Beside the ability to accommodate large number of residents Flat Tower’s surface is perfect for collecting solar energy and rainwater.
Posted by Camelia at 10:47 PM