The funniest joke in the world?

The funniest joke in the world?

In October 2002, a British organisation called Laughlab announced the conclusion of a year-long international study to discover the funniest joke in the world. T

hey found that the British, Irish, New Zealanders and Austalians prefer a play on words; that the French, Belgians and Danes have a taste for the surreal and Freudian; that Americans and Canadians enjoy jokes showing one group's superiority over another; and that Germans have the broadest sense of humour because they find almost anything funny.

The following joke was found to be the most popular world-wide:

A couple of New Jersey hunters are out in the woods, when one of them falls to the ground. He doesn't seem to be breathing, his eyes rolled back in his head. The other guy whips out his cell phone and calls the emergency services.

He gasps to the operator: "My friend is dead. What can I do?" The operator, in a calm soothing voice, says: "Just take it easy. I can help. First, let's make sure he's dead". There is silence; then a shot is heard. The guy's voice comes back on the line. He says: "OK, now what?"

The top British joke was as follows: A woman gets on a bus with her baby.

The driver says: "That's the ugliest baby I've ever seen.

Ugh!" The woman goes to the rear of the bus and sits down, fuming. She says to a man next to her: "The driver just insulted me!"

he man replies: "You go right up there and tell him off - go ahead, I'll hold the monkey for you".

The favourite British word-play was as follows:

Patient: "Doctor, I've got a strawberry stuck up my bum".

Doctor: "I've got some cream for that".

The top Franco-Belgian-Danish joke was as follows:

The top US-Canadian joke was as follows: Texan:

The top Australian joke was as follows:

This woman rushes to see her doctor, looking very worried.

She says: "Doctor, take a look at me.

When I woke up this morning, I looked at myself in the mirror and saw my hair all wiry and frazzled up, my skin all wrinkled and pasty, my eyes were bloodshot and bugging out, and I had this corpse-like look on my face.

What's wrong with me, doctor?"

The doctor looks her over for a couple of minutes and then calmly says: "Well I can tell you that there ain't nothing wrong with your eyesight .."
Posted by Camelia at 10:07 PM No comments:

It was reported that Aung Sang Suu Kyi's constituency had ballot papers where the box beside her name was waxed so that anyone who voted for her could have the marking wiped off. What should you do in such a situation.

Polling Agent: In the morning, bring a torch light to shine at an angle on the box corresponding to your candidate on the ballot paper. If there is wax, it will appear shiny when compared with the neighbouring surface. Immediately object to the Presiding Officer and insist he resolve the issue by replacing the paper. Meanwhile, contact your head or the Election Agent for further instructions.

Quite likely the Presiding Officer will have to manually scrape every ballot paper one by one to remove the wax, if it is proven to be true. Voter:

When the ballot paper is issued to you, put it against the light and watch for a shiny surface that indicates it is different from the neighbouring area. Then ask 'LOUDLY' of the clerk: Why is there wax on my ballot paper?
Posted by Camelia at 10:05 PM No comments: 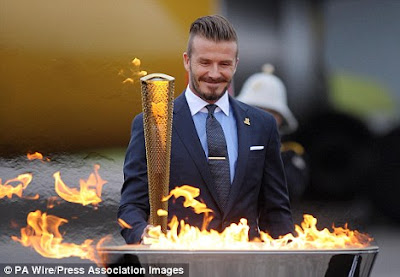 David Beckham's shock omission from the Team GB football squad has left him ‘devastated’ and was met with anger and astonishment throughout the British Olympic movement.

Beckham, who believes he has been treated with ‘a lack of respect’, was given the news he had not remotely expected by manager Stuart Pearce in a phone call on Wednesday evening, telling him he had not made the final 18. But, amazingly, neither Lord Coe, chairman of the Olympic organising committee, LOCOG, nor the British Olympic Association, under whose banner the national team will compete in London, had been informed of the controversial fate of the world’s most iconic footballer. Scroll down for video Big role: Beckham has played an instrumental part in the run-up to the games BECKHAM'S OLYMPIC AID 2005 - Played a major part in Britain's successful bid for the Games 2008 - Appeared in the Beijing closing ceremony 2012 - Flew out to Greece to collect the Olympic Torch and carried it in Britain

They had been under the impression that Pearce would not discard Beckham at the last moment, having named him in the 35-strong shortlist and travelled to America twice to see him play. Instead, news leaked from Beckham’s disconsolate camp yesterday morning, leaving Olympic officials ‘frustrated and surprised’ at both the maverick decision and the manner in which the FA failed to communicate the sensitive news to them.

The FA understand the BOA’s frustrations but were concerned about Beckham hearing the news first. However, they then still had 16 hours to inform the Olympic organisations before word got out. Shock: Only three of the players on the team are allowed to be over 23 years old Watching: Stuart Pearce went to see Beckham in action before he made his decision Lord Coe, who is believed to have been astonished by the development, immediately offered Beckham a role at the Games, saying: ‘David has been an extraordinary supporter, probably our No 1 supporter, of the Games from the very beginning and is keen to continue his enthusiastic support right to the end. ‘He really gets it. He is from east London and knows how important the Games and sport are to young people. He is a great role model and we are lucky to have such an advocate.

I will be talking to him about a Games-time role.’ The offer was echoed by the BOA, who are considering making Beckham their first non-Olympian ambassador. 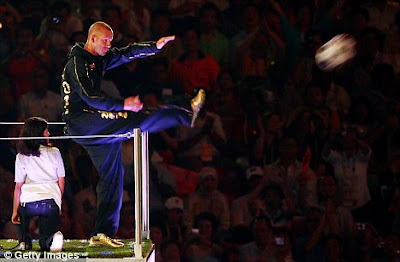 Curtain call: Beckham at the Beijing closing ceremony Sportsmail predicted Bellamy would be included in March Beckham, who plays for LA Galaxy, feared his selection was in jeopardy earlier this week. In a statement yesterday, he said: ‘Everyone knows how much playing for my country has always meant to me. So I would have been honoured to have been part of this unique Team GB squad. ‘As a Londoner, I would have been really proud to have played a small part in bringing the Olympics to my home town as part of Seb’s team, and I can’t wait for the Games to begin and I’ll enjoy every moment along with the rest of Great Britain.’ 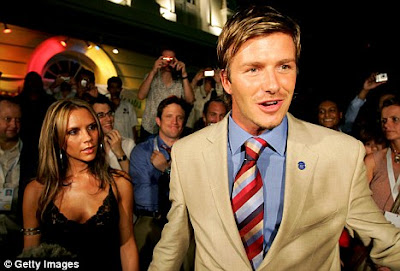 Delight: Beckham and his wife Victoria (left) leave the London 2012 celebration party after London won the Games in 2005 Beckham’s omission at the age of 37 effectively ends an international career that saw him amass an outfield record of 115 England caps.

But the eagerness with which Coe and the BOA have acted to accommodate him reflects how they view Pearce’s decision as crass and short-sighted. Pearce told Beckham he had been omitted because he wanted to strengthen his defensive options following injuries to Tottenham’s Kyle Walker and Chris Smalling of Manchester United.

That means Manchester City full back Micah Richards joins Ryan Giggs and Craig Bellamy as the three over-23 players permitted in the squad, which will not include Everton’s Jack Rodwell — one of the players chosen to launch the Team GB kit — because of injury. Present and correct: Beckham has flown over the world to help the bid Beckham’s absence will frustrate his sponsors, adidas, the British team kit manufacturers, who said they were ‘hugely disappointed for David’, as well as figures within the FA hierarchy, who left Pearce to pick the team but would have much preferred Beckham to be included. Within football, the sense of astonishment was summed up by Gary Lineker, who said: ‘There are arguments for and against David’s selection.

What I don’t understand, though, is why string him along by including him on a shortlist.’

Read more: http://www.dailymail.co.uk/sport/olympics/article-2165930/David-Beckham-London-2012-Olympics-Team-GB-squad.html#ixzz23g2bp2y2
Posted by Camelia at 8:45 PM No comments:

Ooops. Apparently not. After their soccer match against South Korea, Swiss Men’s player Michel Morganella sent out a message which said that Koreans should “burn themselves” and described them as “mongoloids.” How retarded can you really be? Obviously, homeboy was sent packing by the Swiss Olympic Committee 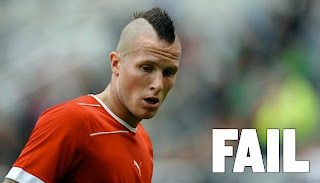 Greek Triple Jumper DQ’d Before The Games Even Begin 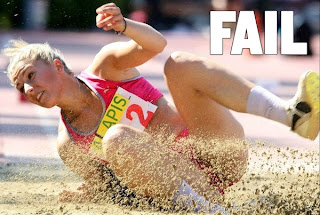 We were pretty pumped to see the beautiful Greek triple-jumper Voula Papachristou, only to learn that she had been removed from the Greek team for sending out a racist tweet. She afterwards apologized to everyone for the mistake. Hey at least people can learn from her mistake right????


Dislocating Your Elbow On The Global Stage 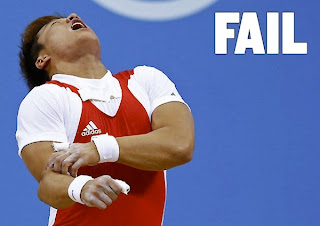 South Korean Olympic weightlifter Jaehyouk Sa was forced to abandon the competition today after his elbow snapped back while he was attempting a 162kg lift.
The reigning champion in the men’s 77kg category was taken to hospital after his second attempt at the snatch ended in disaster.
The 27-year-old successfully lifted 158kg (348.33 lbs) but tried to push it up to 162kg (357.15 lbs) the second time round.


Read more: http://www.dailymail.co.uk/news/article-2182414/South-Korean-weightlifter-takes-gold-worst-Olympics-injury-elbow-snaps-lifting-357lbs.html#ixzz22dvXVFtX
Posted by Camelia at 9:33 PM No comments: