During a visit to the Gulf kingdom of Qatar, Economy Minister Nihat Zeybekçi said Turkey planned to invest $130 billion in its energy sector and $110 billion in its transportation sector, adding that Qatar was key to realizing this vision 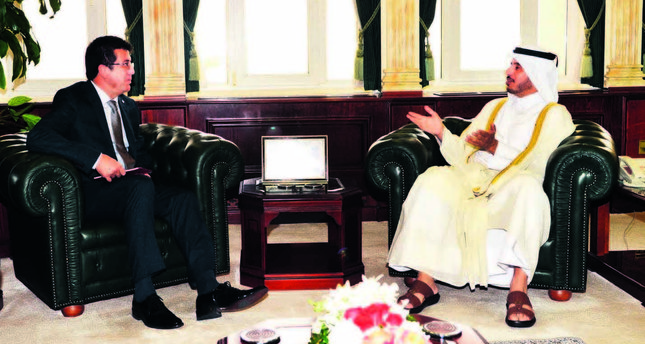 Speaking at the Turkish-Qatar Business forum in Doha, Zeybekçi said, "In the next 10 years, we plan to invest $130 billion (TL 276.2 billion) in the energy sector, $110 billion in the transportation sector, more than $10 billion in information and communication technologies. And we have put Qatar in first place in our foreign economic vision. We will soon deliver good news to our Qatari brothers regarding much longer visas, residence permits and limitless residence permits."

Zeybekçi emphasized that he was pleased to be in Qatar and that there are brotherly and historic ties between Qatari and Turkish people. The Turkish minister said that economies such as Turkey and Qatar could direct the world economy in the new era.

"Qatar has made $774 million in foreign direct investment in Turkey until today. Turkish contracting companies have carried out 117 projects worth $13.5 million in Qatar. Qatar is a No. 1 partner in terms of cooperation, foreign economic vision and brotherhood and this will stay that way," said Zeybekçi.

Zeybekçi also said that Turkey is proud of the fact that Qatar will host the 2014 World Cup. Qatar's Minister of Economy and Trade Ahmed bin Jassim Al Thani underlined the importance of the relations between two countries and said, "We will make efforts to develeop these relations further. We agree on this subject. It is of great importance for the private firms to share their experiences. In accordance with our 2030 goals, we aim for a strong economy which will be able to survive without depending on natural sources."

Qatar will host the 2022 World Coup and Turkey is aiming to get Turkish companies involved in new projects in the country. The trade volume between Turkey and Qatar was $24 million (TL 51 million) in 2003.

Turkish investments in Qatar are mainly in the fields of consultancy services and contracting and sub-contracting. Qatar is one of the most important markets for Turkish business circles in the Middle East with huge natural and economic resources. The country offers lots of opportunities for Turkish exporters and contractors. This potential has attracted Turkish businessmen in the last decade and the trade relations between Turkey and Qatar have also developed in this period.

In order to complete the legal framework of bilateral commercial and economic relations, Turkey and Qatar have signed a number of agreements, including an Agreement on Enhancing Economic and Technical Cooperation, Bilateral Investment Promotion and Protection Agreement (2008) and the Double Taxation Prevention Agreement (2008). The Turkish-Qatari Business Council was also founded in 2006 in order to develop and enhance bilateral economic cooperation between both countries' business circles.

CLIMATE CHANGE AND DROUGHT IN THE MIDDLE EAST

CLIMATE CHANGE AND DROUGHT IN THE MIDDLE EAST 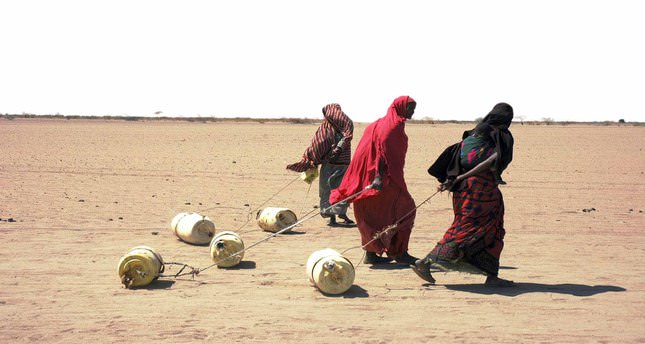 Reports about climate change were published after a series of meetings in preparation for a climate summit to be held in New York on Sept. 23, 2014. In the first report published in September 2013, wide coverage was given to the role of humans in climate change.

The second report published in March, emphasized that conflict and immigration due to issues of food production may increase as a result of global warming and extreme weather conditions. The third report, which included outcomes of meetings held on April 13, 2014 in Berlin, argued that food prices will increase by 58 percent across the world by 2050. The report also explained that global emissions resulting from fossil fuels reached their maximum levels between 2000 and 2010 in comparison to previous decades. If these emissions don't decrease by 40-70 percent, global warming will not cease. The need for energy, which increases with intense use of coal, and a growing global population are the main reasons for the increase in carbon emissions. However, tripling the use of clean energy will negate the destructive effects of climate change.

Today, fossil fuels are used to produce 80 percent of our energy. In order to minimize the effects of climate change, this figure should be decreased to 30 percent. The report also suggests that more effort should be placed on utilizing renewable energy sources such as wind and solar power. However, these renewable energy sources require vast annual investments, which may not be financially sustainable.

Due to the effects of climate change, a decrease in the amount of rainfall as opposed to an increase in evaporation rates has been seen in recent years, particularly in the Middle East. Additional restraints caused by climate change, as well as overpopulation, growth of cities, water pollution and ineffective use of energy sources, have contributed to water shortages across the world.

As a result of studies on climate change, we know that the surface temperature of the Middle East will increase by 2.5 to 5.5 degrees Celsius in the coming years, causing a 20 percent decrease in rainfall in the region.

While an increase of 2.5 to 3.5 degrees is expected across Turkey, rainfall will diminish by 25 to 35 percent. This year, precipitation is below previous averages for Turkey and the Middle East. This year's snowfall, which is the main source of surface and ground water, was less than last year's average.

In line with this evidence, it is highly probable that we'll see a worldwide drought next summer. It is predicted that this drought will greatly affect food prices. According to the World Bank's food price index, food prices that were lower in January and February rose in March. Water shortages caused by drought not only affect food production but also energy security.

Turkey in particular is not a water-rich country and experts predict that water shortages will increase with population growth. The water levels of dams in Turkey's two biggest cities, Ankara and Istanbul, are below the 50 percent level. With this month's good rainfall, water levels will at least increase.

The need for potable water in Istanbul and Ankara is provided by dams but alternative projects must be developed to prevent further water shortages. Careful use of water is vital in order to manage the water crisis.

This year is described as the driest year in the last decade and as a result the agricultural sector, which uses an average of 70 percent of all water sources, will be negatively influenced and food prices may increase. The decline in water levels in dams could negatively affect electricity generation and suppliers may have to resort to other sources such as natural gas. In order to plan effectively, we must consider not only the environmental effects of drought but also the social and economic consequences.

The effects of drought can be clearly seen in the Middle East. Under normal conditions, only one-fourth of the world's average precipitation falls in the Middle East. What's worse is that this year rainfall was at its lowest level in 60 years, especially in Jordan. This period of drought was also seen in Lebanon, Iraq and Syria, and adversely affected water sources and agricultural activities. This year, food imports will rise in the Middle East, which is already the biggest importer of food in the world. In Syria, where a civil war still rages, this year's rainfall was half of the annual average. Experts say that drought will be particularly severe in the cities of Aleppo, Idlib and Hama.

As the Syrian civil war severely damaged water distribution systems, from March 2011 onward 4.5 million people migrated within the country while 2.5 million others sought refuge in neighboring countries. The chaos inflicted a heavy blow on the country's agriculture sector. According to the World Food Programme (WFP), the need for grains in Syria was 5.1 tons last year, while this year the amount that will be grown with the present capacity is between 1.7 to 2 million tons. A serious food shortage is expected as international aid organizations also fell short in providing food aid. An increase in refugees fleeing to neighboring counties because of hunger is a serious possibility.

Additionally, the demand for water within a growing population, concern for food security, unproductive use of water resources and the lack of modern irrigation techniques in agriculture causes a major loss of water and further deterioration of the situation. In order to use water efficiently, water management strategies should be regulated and public awareness raised. In addition, climate change will alter the management and functioning of present hydraulic structures (hydroelectric, flood control, drainage and irrigation systems).

Water management affects energy politics, the environment, public health, nature conservation and food security. For these reasons, the damage caused by climate change should be seriously addressed and water management systems should be adapted to new conditions.
http://www.dailysabah.com/opinion/2014/04/18/climate-change-and-drought-in-the-middle-east

* ORSAM Researcher, Dr
Posted by Camelia at 11:21 PM No comments: